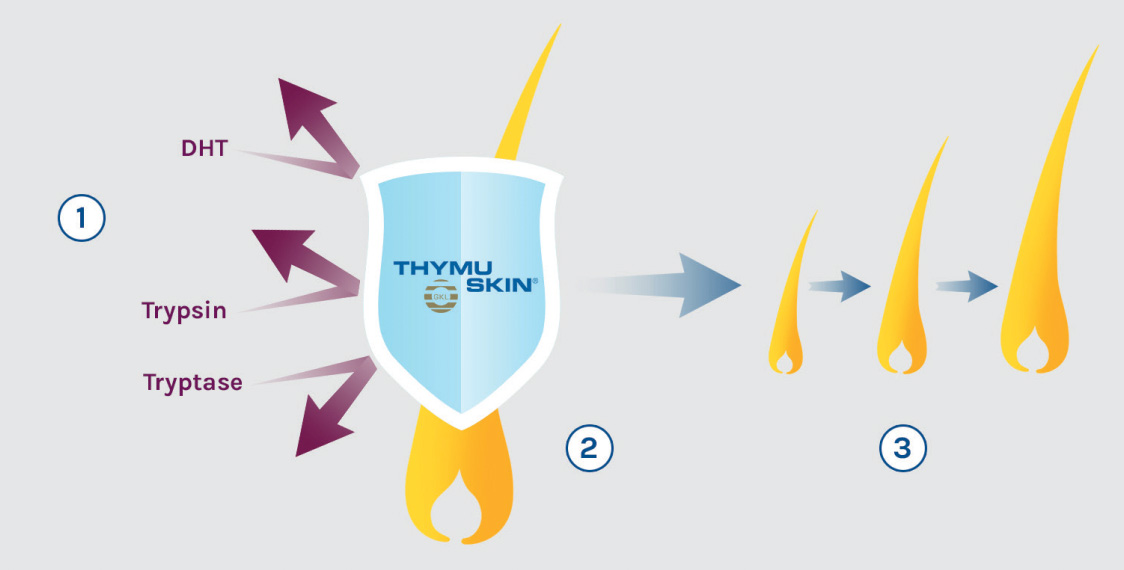 What makes Thymuskin® unique is the biologically active agent GKL-02, as it inhibits various enzymes that play a key role in hair treatment. It works by promoting cell vitality in the hair matrix which enhances the formation of new hair cells and strengthens the existing hair follicles. Harmful DHT are potentially blocked, which can reduce the dying of hair follicle cells.

Thymuskin® also activates and proliferates the keratinocytes in the hair matrix; the basic substance of each hair. It promotes cell vitality which enhances the formation of new hair cells and strengthens the existing hair follicles.

Due to its effective active ingredient, no side effects, and its studied results, THYMUSKIN® is continuously recommended by dermatologists, pharmacists and salon owners.

THYMUSKIN® increases the cells in the hair matrix, as well as the viability and vitality of human kerationocytes which are greatly involved in producing the root substance of the hair.

THYMUSKIN® impairs the main enzymes which have been shown to play a major role in the transition of the anagen to the katagen and telogen phases of the hair growth cycle. Harmful 5alpha reductase is being blocked too.

Mode of action in hair growth disorders and hair loss

The thymus gland is an important organ of the lymph system. The thymus is particularly significant in the immune system, because it is where the T-lymphocytes recognize foreign substances in the body, such as bacteria or viruses, are formed. Different peptides, so-called thymosins, are isolated from the thymus.

Thymosins are used to strengthen the immune system

Some Thymosins are used in different clinical pictures mainly to strengthen the immune system or in cancer therapy. The peptides contained in the thymus are also characterized by their property of neutralizing and normalizing disorders of the hair follicle.

The success of Thymuskin in treating thinning hair in both women and men is due to the biological activity of the bovine-free thymic peptide active ingredient GKL-02. It improves the supply of nutrients to the cells of the hair root (follicle) during the growth phase (anagen phase). Thus the unique active substance complex supports the formation of new hair cells and strengthens the existing cells. At the same time it lengthens the hair growth phase. The hair follicles which have remained intact are reactivated, new hairs are formed and the growth phase is clearly lengthened.

Tests on human blood cells have demonstrated that Thymuskin stimulates lymphocytes to divide. The effect is dependent on the concentration of the thymic peptide active ingredient GKL-02 administered. As a further medical study has shown, the stimulation of the proliferation of human lymphocytes is independent of the body’s own messenger substances in the immune system. The growth-stimulating effect on the cells in the hair follicles is connected with this and accordingly takes place directly in the hair roots.

Thymuskin preparations are thus able to reactivate hair growth on bald patches which are no more than 3 years old.

Histologically the hair loss (telogen phase) is preceded by an increase in the mast cells. These mast cells on the hair root disappear again after the hair falls out, therefore a major role in the hair loss process is ascribed to these mast cells. This is where Thymuskin intervenes, by suppressing the activation of the serine proteases trypsin and tryptase which are contained in the mast cells and by altering the cell function. Through the inhibition of these enzymes, the telogen phase is slowed down to the greatest possible extent. The Thymuskin products with GKL-02 contain valuable thymic peptides that are produced totally bovine-free. They are a mimicry of the natural total thymic extract. Depending on the preparation, GKL-02 is enhanced with other additives so that systematic, specific effects can be achieved.

Thus Thymuskin contains non-animal thymic peptides, which are a mimicry to the natural substances, of consistent quality and purity. The peptide compounds in Thymuskin penetrate into the hair root and influence the growth of the hair cells. They work similarly in women and men. No side effects have been identified in the various scientific studies and for 35 years in which Thymuskin has successfully been on the market. Thymuskin also contains vegetable proteins and Vitamins B, E and F, which systematically act on human cells, cell cultures and biological substances.

In the test system for mitogenic co-stimulation, the thymic peptide active ingredient GKL-02 displays an effectiveness which is several times greater than that of the natural initial product. This makes it possible to incorporate a thymic peptide active ingredient GKL-02, which is very expensive to manufacture, into an economical application concentration according to the respective severity of the hair loss.

The empirical effectiveness of Thymuskin in the different forms of thinning hair has been confirmed in a number of clinical studies. Its biological effectiveness is dependent on an adequate concentration, the duration of use and the existence of intact hair follicles.
The effectiveness of Thymuskin has been demonstrated amongst other things using the EpiDerm model, which showed that the cells of the test tissue multiplied under the influence of a 10% solution of Thymuskin. The test tissue consisted of keratinocytes, such as those which are also found in the area of the hair root sheath of the hair follicle (keratinocytes, cells which form the skin's horny layer, originate from epidermal stem cells).

It interacts with parts of the neuroendocrine system, and right those hormones are produced, which are involved in the regulation of human hair growth (such as prolactin and thyrotropin). This mechanism of action stimulates also in Thymuskin Shampoo and in Thymuskin Scalp Serum the process of hair formation and thus supports natural hair growth.

You are signing up to receive product updates and newsletters. By signing up, you are consenting to our privacy policy. You can opt out at any time.